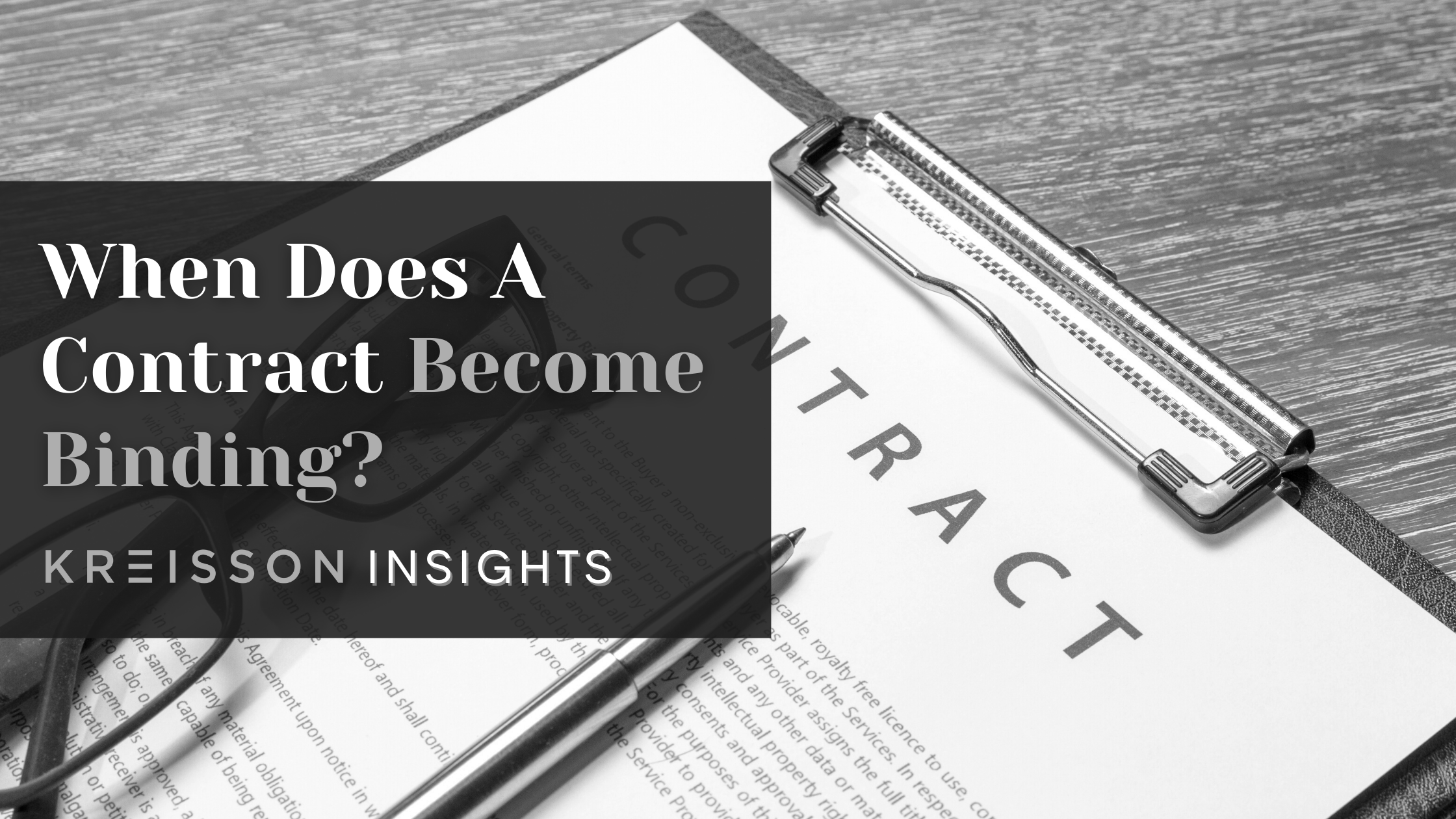 When Does A Contract Become Binding?

The starting point to determine whether a contract is binding is to establish whether there is a common consensus between the parties to create a binding contractual relationship.

However, the expression of an intent to create a legally binding relationship is not always found in the form of a formal written contract or agreement, which may only become binding once each party has signed on the dotted line.

Courts have frequently been required to determine whether a preliminary agreement is binding, for example in the form of a letter of intent, heads of agreement or even email correspondence (Pre-Contract Documents).

These types of Pre-Contract Documents commonly contemplate entry into a formal contract after a further period of negotiation.

Whether or not a contract has been formed depends on the objective intention of the parties in the circumstances, or “what each party by words and conduct would have led a reasonable person in the position of the other party to believe”. It is a common misconception that an agreement is not binding until there is a signed contract unless, of course, that is expressed in the documentation.

This Victorian Court of Appeal case provides an example of where a business deal can become problematic.  It involves Pre-Contract Documents which were not drafted appropriately to bind the parties to their intended outcome.

In 2014, Anyoption and Nurisvan began negotiations with the view that Nurisvan would purchase shares in FIBO.

On 24 December 2014, the parties entered a heads of agreement (HOA) which only allowed for unilateral execution by FIBO and Anyoption, not Nurisvan, and which featured the following recitals:

c)   the parties wish to manifest their intention for the Vendor to sell and the Purchaser to purchase all       of the shares in this Deed;

5.1       The Purchaser will acquire the Shares from the Vendor free from any encumbrance.

By a letter in late 2015, Nurisvan attempted to terminate the HOA.

Anyoption sought a Court order for specific performance requiring Nurisvan to perform the terms of the HOA.

The primary judge ordered that the parties were to perform the HOA and execute a Share Sale Agreement, on the basis that clause 5 was still operative on whatever other terms were reasonably necessary to give business efficacy to the Share Sale Agreement.

Nurisvan appealed and the Court of Appeal held that the HOA was not legally binding for the following reasons:

The Nuvisan Decision was recently considered by the New South Wales Supreme Court in the MX Decision in which Robb J endorsed the approach of the Victorian Court of Appeal in the Nurisvan Decision.

This case considered whether email correspondence between the parties’ solicitors regarding an offer to settle the matter was intended, upon acceptance, to immediately bind the parties prior to a formal settlement deed being entered into.

His Honour therefore found that, in these circumstances, there was insufficient certainty to create an intention be bound by the terms expressed in the email.

As can be seen from the above, whether you intend to immediately bind a party to a deal or whether you only wish for matters to be binding once a contract is entered into depends on the precise wording of the agreement.

If you need assistance with structuring Pre-Contractual Documents or binding contractual documents, contact Emilee Clark, Associate, on (02) 8239 6521 or emilee.clark@kreisson.com.au.